Since lockdown, I think it is safe to say, most people’s lives have changed in one way or another; not 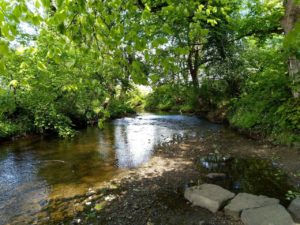 being able to shop in the same way or meet family and friends. One of the big changes for me has been walking the dog, normally I would jump in the car and head up to into Pentlands – far from the maddening crowds! However, I have been walking locally and found myself having to find a new walking route due to the golf course opening back up – nowhere on the course is safe due to the lack of practice golfers have had over the last 13 weeks or so! The picture of the river could be anywhere, a secluded corner of Lothians for example. In fact, it is the Water of Leith in behind Longstone Sainsbury’s – not so isolated, far from people or the city.

With the church building is closed and meeting in our ‘home groups’ has become more difficult; it has been quite a task to keep in touch with people. A few weeks ago, a new Growth Group started up called ‘Simply Jesus’ based on NT Wright’s book of the same name. As with NT Wright books/studies I am convinced this title is tongue in cheek – not simple. It is great to be leading a small group, some of the people I know, others I did not and meeting on a weekly basis. Like the picture of the river, I think we have preconceived ideas of who Jesus was or is.

Maybe the image in your mind of Jesus is found in a stained-glass window or a picture in a Bible – I have a Bible that has a few pictures in and they kind of indicate Jesus was Westerner! Maybe a man with hammer and chisel in hand, working the wood in his father’s business, or the Christ on the cross with the thieves. Whatever your perception of who Jesus was, the course is certainly challenging me into thinking of him in a different light. He was planned from the beginning, his teaching stirred up division leading to his death, some thought he was the leader the nation of Israel was looking for to break them free from Roman occupation. The study so far has knocked down some of the misconception and ideas I had and has whetted my appetite for more. Understanding what the nation of Israel were expecting in a Messiah and what the mood was in the nation around the time of Jesus are just a couple of the question we have looked at so far! Some of it is new thinking, some it is ‘Ah! I knew that’ – but had not put the pieces together. I would highly recommend the book on which the study is based, it is well worth a read and it will stretch the grey matter a bit.