This week we will be starting a new sermon series called “Off the Map”. For this series, we’ll be looking at stories of how God moves in the midst of disorientation, to form his people and further his mission in the world. 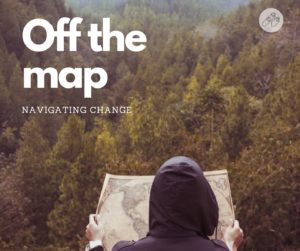 Rupert will be speaking to us from Genesis 12 vs 1-9. You may wish to read this passage a few times and as you do so consider;

12 The Lord had said to Abram, “Go from your country, your people and your father’s household to the land I will show you.

“I will make you into a great nation,

and I will bless you;

I will make your name great,

and you will be a blessing.[a]

I will bless those who bless you,

and whoever curses you I will curse;

and all peoples on earth

will be blessed through you.”[b]

4 So Abram went, as the Lord had told him; and Lot went with him. Abram was seventy-five years old when he set out from Harran. 5 He took his wife Sarai, his nephew Lot, all the possessions they had accumulated and the people they had acquired in Harran, and they set out for the land of Canaan, and they arrived there.

6 Abram traveled through the land as far as the site of the great tree of Moreh at Shechem. At that time the Canaanites were in the land. 7 The Lord appeared to Abram and said, “To your offspring[c] I will give this land.” So he built an altar there to the Lord, who had appeared to him.

8 From there he went on toward the hills east of Bethel and pitched his tent, with Bethel on the west and Ai on the east. There he built an altar to the Lord and called on the name of the Lord.

9 Then Abram set out and continued toward the Negev.