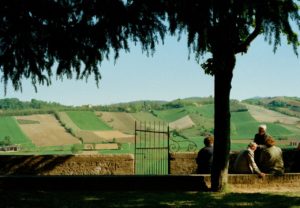 I escaped the pandemic recently by rooting through old photos – this one’s an old favourite of mine.

I like how the silhouetted tree and low wall divide the picture and frame the luminous landscape. The bars of the gate in the centre of the wall carve the distant fields into strips, while the hillside is a swell of colourful scraps you could almost touch; a billowing patchwork of pictures, each one etched by sun, and shadow.

This view has little changed since the tenth century, and there’s a comforting sense of time stood still. As I fix the gaze of the woman turned towards me, I wonder about this little group of villagers and the easy conversation they are having. I imagine the villagers’ habit of meeting in this place, as they have for generations. I picture how they might convey ideas and feelings through the subtlest gestures and expressions. I can almost hear the distinctive roll and lilt of their language; smell the scent of damp pine they are breathing …

I took this photo in the village of Castell’Arquato in the hills of Emiglia-Romagna during my year abroad as an Italian language student in 1997. As a foreigner living abroad, I greatly enjoyed observing the cultural differences in people and places I encountered, documenting them in sketches, notes and photos. However as the year went on, I became conscious of a mysterious ache. I was missing my home, family and friends. But there was more to it: I was separated from my native language and culture, and from the sights, sounds, smells and stories that formed my own sense of identity and belonging.

In these strange days of lock down and social distancing, I find myself once again observing others from afar, and through a camera lens. ‘Staying at home’, yet at times curiously homesick, I’m also experiencing a similarly ambiguous grief over losses I can’t quite fathom. However, this luminous picture from my past reminds me that now, as then, there’s treasure along with the discomfort. And until such time as the veteran villagers of Castell’Arquato meet outside again – just as they always have – I’ll draw comfort from their memory.