Our place in the world – A reflection by Tom Ingrey-Counter

This landscape painting by John Constable is thought by scholars to express the artist’s turmoil and distress following the death of his wife from tuberculosis a few years earlier. Constable’s close friend, the Reverend John Fisher supported the artist during this difficult time, inviting him to his Salisbury home and encouraging him to paint this picture of the cathedral. Constable uses the weather to express the range of emotions he was feeling at this stage of his life: brooding storm clouds and a streak of lightning are set dramatically against a rainbow and a small glimmer of sunlight. The rainbow, which was added late to the painting, seems to suggest that life’s storms can be weathered. Tellingly, it appears to rest on Leadenhall – the home of John Fisher who died just four days before the painting was exhibited in 1831 – and becomes a tribute to their friendship.

As someone who grew up in Salisbury, the sense of place evoked in this picture resonates deeply with me. The view is a very familiar one. Our garden overlooked the water meadows on the right of the picture, and my secondary school backed onto the cathedral close. As a boy, the cathedral spire – the tallest in the UK – cast its ancient shadow over the playground like an enormous sundial. When driving across Salisbury plains at night I watched for its red summit beacon to appear, winking through the dark, signalling home. Later, when I found faith as a young person, it appeared as a giant finger scraping heaven – an unmissable signpost to Christ, planted in the centre of a bustling city.

In adulthood, the cathedral has become a place of personal pilgrimage, a deeply consoling and enduring symbol of a magnificent God who never changes. And yet this seven hundred year-old mass of gothic stone seems different every time I re-visit it: its soaring vaults and arches, vast windows and intricate decoration seem to mirror a God ever-increasing in complexity, and ultimately unfathomable. The building hasn’t changed, but something inside me has …

Constable saw God foremost in nature, its realistic details and meteorological effects. In Salisbury Cathedral from the Meadows, the cathedral appears small and vulnerable beneath a turbulent and threatening storm, its spire a slender ‘needle darting into the sky’ (as he described it). This dramatic landscape of the soul and moving homage to friendship inspires me to keep returning to the ancient and familiar landmark of Salisbury cathedral, in the hope of re-discovering my own place in the world.

Do you have a favourite building that inspires you? How has your relationship with it changed over time? 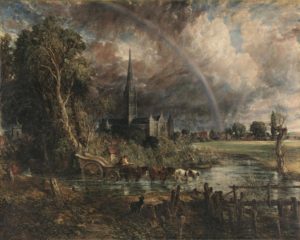 Salisbury Cathedral from the Meadows 1831 John Constable 1776-1837 Purchased by Tate with assistance from the National Lottery through the Heritage Lottery Fund, The Manton Foundation and the Art Fund (with a contribution from the Wolfson Foundation) and Tate Members in partnership with Amgueddfa Cymru-National Museum Wales, Colchester and Ipswich Museum Service, National Galleries of Scotland; and Salisbury and South Wiltshire Museum 2013 http://www.tate.org.uk/art/work/T13896