This week’s book review is from Naomi Entwistle on “The Way of Julian of Norwich” by Sheila Upjohn. Naomi says, ‘ it is more of a devotional book really’. 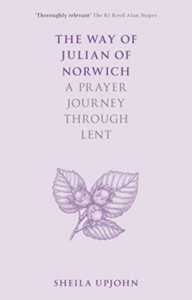 ‘I’m working my way through this small book this Lent. Julian of Norwich was the first woman to write a book in English. Her writings were so controversial that they were kept secret by her followers for hundreds of years before being distributed. She described God as our mother and, 500 years before Freud’s theory of projection, suggested that much of what we understand as God’s anger is nothing but the reflectino of our own vengeful desires. This (week in which we have marked) international women’s day I am grateful for all women, whether medieval or modern, who speak out for truth, justice and compassion.’